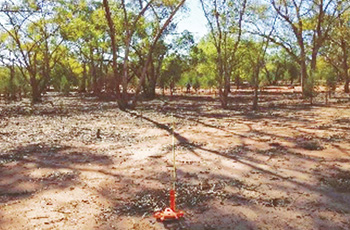 The signing was the cumulation of close to a decade of expertise, consultation, and persistent effort. The property has significantly contributed to biodiversity in NSW and demonstrates our commitment to minimising the impact of our operations on the natural environments in which we operate.

Group Environment Manager, Jonathon Thompson explained what a biodiversity offset property is, and work that was completed to establish a BSA for the Chelsea property.

“The NSW government’s Biodiversity Offsets Scheme is the framework for offsetting unavoidable impacts on biodiversity from development (like mining) with biodiversity gains through landholder stewardship agreements. The system ensures development is offset by like-for-like vegetation communities. We purchased the Chelsea property as a biodiversity offset property for our Hera Mine in 2013 and started working closely with the government of NSW to establish a BSA under the Biodiversity Conservation Act 2016,” Jonathon explained.

“We chose the Chelsea property because the vegetation communities on the property were similar to those in our mining area and were relatively intact, despite being surrounded by modern agricultural activities, and it is adjacent to a state conservation area, significantly increasing the ecological value of this property.
“Regular field monitoring in accordance with the NSW government’s BAM standardised methodology of the vegetation communities, flora, and fauna on the property kick started our work towards establishing a BSA for the property,” Jonathon continued.

“Given the Chelsea property is a WLL held in an ‘in perpetuity’ agreement with the NSW government, we worked closely with them to negotiate terms to apply the BSA to the title. For example, as the land is a WLL, the NSW Forestry Corporation (NSWFC) owned the timber assets on the property. To protect biodiversity values in perpetuity, we compensated NSWFC for the timber to ensure the trees remained standing and continued to provide ecological value.

“Our BSA has now generated multiple ‘biodiversity credits’, and a Biodiversity Management Plan was developed in consultation with the NSW government and independent ecologists to ensure the biodiversity values on the property are protected and improved over-time.

“We have used some of our biodiversity credits to offset legacy disturbance at our Hera Mine and the Federation Project exploration decline. When a credit is retired, we make a payment into the Total Fund Deposit (TFD). Once all the credits are retired, the TFD will be used to fund management projects to improve biodiversity at the Chelsea property in perpetuity. This ensures the property is protected through time and money is allocated to protect biodiversity,” Jonathon concluded.